THE LAST ARENA: The Thrill Has Gone…

Posted on September 18, 2019 by fiskeharrison

‘The North Of Castile’

The Joy Of The Thrill

Lungs burning, vision fuzzing, heart thumping and hands shaking, I stood watching and chatting with my companions in the street, Josechu Lopez and David Garcia, as the last bull moved up the street last Tuesday, in the antepenultimate encierro of the oldest feria of bull-running in the world, and the last time I expect to find myself sharing the asphalt with my favourite animal ever again. 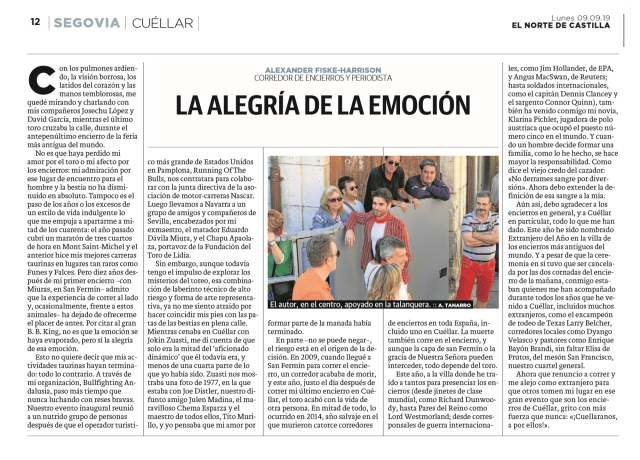 It is not that I have lost my love for the bull or my affection for encierros, ‘bull-runs’: my admiration for this meeting place for man and beast is entirely undiminished. Nor is it the decrepitude of old age or excesses of an indulgent lifestyle that are pulling me out as I enter my mid-40s: I could still clock a three-and-three-quarter hour marathon in Mont Saint-Michel in France last year, and did my finest taurine runs ever the year before that in such rarified places as Funes and Falces. 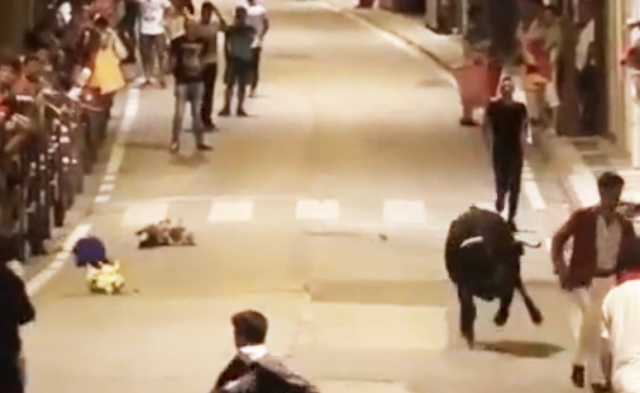 Midnight Run – Alexander Fiske-Harrison, far right, running on the horns of a bull in a nocturnal encierro in Funes in Navarre in 2017

No, ten years after my first ever encierro – with Miuras, in San Fermin – I have had to admit that my personal experience of running alongside, and occasionally in front of, such animals has ceased to deliver a pleasure that outweighs the ultimate risk. It is not that, to quote the great B. B. King, “the thrill is gone”, but that the joy in that thrill has.

English author and journalist, broadcaster and conservationist. Author of Into The Arena: The World Of The Spanish Bullfight, shortlisted for Sports Book Of The Year 2011. Editor & Co-Author of Fiesta: How To Survive The Bulls Of Pamplona. Author of 'The Unbroken', finalist for Le Prix Hemingway 2016
View all posts by fiskeharrison →
This entry was posted in Uncategorized. Bookmark the permalink.