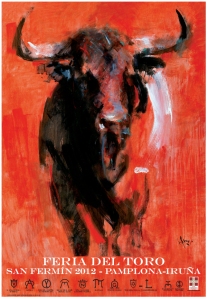 As expected, my capacity to run bulls, drink, eat, drink more, dance, watch the bullfight, drink even more and then dance once again while keeping a blog going is utterly useless. Anyway, here is a brief post about the wonders of Pamplona this year.

First, I arrived at the train station from Barcelona at about eleven p.m. on July 5th and met up with the Pamplona Posse, led by Graeme Galloway, who provides my excellent accomodation (as well as bullfight tickets for those without, and balcony spaces to watch for those who don’t run.) His website is here.

The next day, the day of the infamous bacchanale that is thechupinazo, I went to the annual champagne party of that most senior Prince of Pamplona, Noel Chandler. Which is the most comfortable way to catch the obvious charms of the street, as this years best photo below shows. 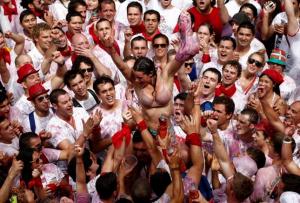 There I met up with a host of old friends, including the longest-serving bull-runner, Joe Distler, along with Larry Belcher, Bomber, Rick Musica, Tom Turley, Angus MacSwan, Tom Gowen and a host of other pamplonicas.

After that… well, I can’t quite remember. There was lunch with Tom and Angus and then dinner with Joe and Larry and Bomber and then it all seems to disappear from view. All I know is that I slept through the first bull run.

However, the next day, the Sunday of the Miuras, I was up bright and early to run with Angus and Gary Masi at Telefonos, near the end of the run. There Gary and I ran the side of the crowd lining the street with the churning thunder of horn and muscle six half-ton-plus Miuras and six three-quater ton oxen present on our other side. We pulled out as the last bull’s horns strayed dangerously close to the crowd and thus the back of our legs. To be honest, running on Miura Sunday is an honour, but not a blessing. There were at least five thousand people in that half mile of street and that’s four thousand too many.

Something that is both an honour and a blessing is the runner’s breakfast that follows – after a head count and cognac with vanilla at Bar Txoko – on planked tables lining the streets, every person about as happy to see each other again after a year apart as they are to survived the bulls.

Again, the day fades into blur after that. I will write more, but for now, leave you with the other posts on this blog. The street is calling me…