In an exchange of messages with the equally brave and enigmatic American bullrunner known only as El Bomber (and whose eyes no living man has seen), he sent me the following photo of him with maestro Juan José Padilla from the 1990s, sometime between Padilla running with the bulls of Miura at 8am that Sunday morning, and fighting them at 6.30pm that night. He speaks of Padilla with a reverence and respect that all pamplonistas hold, and this is because not only is one of the few matadors who has run with the bulls he was going to later fight, but because his style of fighting, with the vast and lethally dangerous Miura bulls (694kg this year), which combines skill, courage, scale and flamboyance – all of which traits are central to the Feria de San Fermín itself. Even the hardest-boiled runner of the corner (where the bulls fall), Rick Musica, smiles when he remembers running with Padilla…

This led me to dig out my old photos of my own “20 hours with Padilla” (as the photographer Nicolás Haro, who was present, described it when we had both recovered. All photos from here on in are by Nicolás.)

Juan was the first matador I met, introduced to me by his and my brother-in-arms, the bullfighter and politicó Adolfo Suárez Illana (as described in chapter 2 of my book Into The Arena which came out last month.)

I think, perhaps luckily, I did not realise the honour being paid to me when Padilla then took me to the farm of Álvaro Domecq, LosAlburejos, to watch him train with the young 250kg bulls of Torrestrella in my first tentadero:

“Then, following very roughly the structure of the bullfight –but with no banderillas, the colourful, barb-pointed sticks – we move straight on to the muleta, the smaller red cape used in the final act for the close work with the bull.

“The young animal, faster than any full-sized bull, would seem to be impossible for a bullfighter to create any elegance in caping. However, Padilla does exactly that. He uses delicate movements at the base of the cape to bring its head down, horns grazing the arena floor, drawing neat half circles in the sand, while his body strikes and maintains the long lines, so reminiscent of flamenco: the line and the curve, calm conflicts of geometry.

“Despite the skill, Padilla still takes a battering from the cow, both horns into his waist, not hard enough to penetrate but hard enough to knock him down, causing a bleeding gash in his hand. I watch closely and ponder the reason why he doesn’t even look at the wound.”

Following a lunch with Juan, Don Álvaro, and various members of the Domecq family including the rejoneador, horse-back bullfighter’, Antonio Domecq who had been training on the same cattle with us, we set off back to Jerez. This is what happened next.

“I WAKE up in the car half an hour later. We are in the streets of

Jerez de la Frontera, the town of sherry itself. Padilla is shouting out of the open window at passers-by who recognise him. He has been steadily bantering with Nicolás as I have been dozing and now he is playing to his audience. Suddenly he shouts at Nicolás to stop outside a nightclub called Lalola – it is 4.30 p.m.

‘Here. It’s my nightclub, let’s check up on them.’

We follow, partly out of interest, partly for the novelty, but largely because of the irrepressible good humour of our host.

Inside, Padilla introduces us to the manager and the bar staff and I 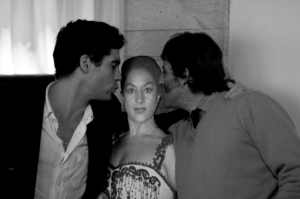 am given a large rum and Coke: and when I say large, I watch as a quarter of a bottle of Ron Barcélo empties into the huge glass before Padilla nods to his employee to stop.

What happens next is something of a blur, not helped by the utter illegibility of my notes and the fact that very few of Nicolás’s photos are in focus. There is a plan to return to Padilla’s house to collect our car and then return to Seville. However, that plan is scrapped under the barrage of Padilla’s jokes, stories, and demonstrations of the perfect muleta pass on the dance floor of the empty nightclub. 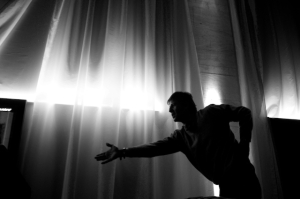 More drinks come. I get through most of the rum bottle. Demands are made by all of us for food to Padilla, who eventually concedes. It is dark outside when we leave, but instead of going to Seville, we end up at a hotel where Padilla’s friend and fellow matador Finito de Córdoba is staying before a fight. As Nicolás and I grab some food at the bar, Padilla goes to find Finito but for some reason he isn’t in the room he’s meant to be in. I find out months later from Finito himself that he had hidden under the bed rather than get caught up in the whirlwind of his friend’s night out.

Now we need more company, Padilla decides, and we find ourselves in a dance studio with Antonio El Pipa, a master of flamenco who has danced on the stages of Broadway in New York and Sadler’s Wells in London. He is a childhood friend of Padilla, and after another serving of rum – during which I don part of his costume and demonstrate my own flamenco as Padilla and this new maestro look on laughing –

We get back in the car and return to Padilla’s house, where we settle

in to the longest argument about fighting and dance I have ever had in any language, not least my third. Nicolás’s photos show Padilla, Antonio and me, at this point sworn brothers, arms around one another, huddled in the corner of a large room, gesticulating wildly with slack lips and glazed eyes.

Nicolás manages to get me out alive at 5 a.m. We drive to Seville. Padilla sleeps in his bar, awaking three hours later to fight in another tentadero. Before I leave, Padilla asks me to sign a cape he keeps in the bar, which has been inscribed by the greatest matadors of the past twenty years. I am insanely honoured and try to think of something memorable in Spanish. I settle for a drunken hybrid, my words in English, García Lorca’s in Spanish. It goes something like this:

To my Spanish brother, a maestro of elegance and generosity. When he enters the ring,

Padilla is happy, not fully understanding. Antonio El Pipa – who speaks English and knows his poetry – is almost in tears at the words of the long dead maestro.

Into The Arena: The World Of The Spanish Bullfight (Profile Books, 2011). On sale at all major UK bookstores and Amazon here.