First day of running with the bulls, Pampona 2011 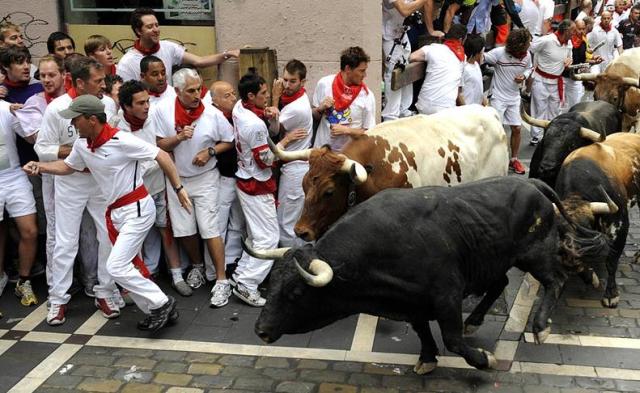 As you can see the first day from Pamplona was anarchy with the beautiful bulls of Don Álvaro Domecq from his ranch – known to toreros as the Cathedral of the Bullfight – ‘Los Alburejos’ (whom I have met before under other circumstances.)

Despite this I managed to catch up with one for an intimate encounter pictured below. I am in the red and white striped blazer. These happen to be the colours of Pamplona during San Fermín. They also happen to be colours of the Eton College Athletics Club, awarded to me in ’94 for the 400m. 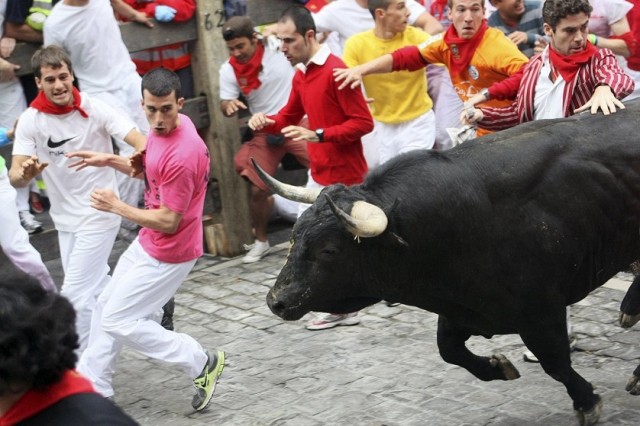 (This photo appeared in the Diario de Navarra, Daily Telegraph [UK,] Die Welt [Germany] and around the US. Copyright REUTERS/Joseba Etxaburu)

It is severly frowned upon to touch the bulls, but I have just seen his brother coming up behind me, so I needed to stabilise myself at a flat sprint while looking over my shoulder, until I could judge the moment right to slip between the two bulls, as shown in the photo here. This meant I could “run on the horns” of a bull, while neatly reducing the risk of being knocked into by other runners with a half-ton “people-plough” clearing the path in front of me. A tricky balancing act, indeed.

English author and journalist, broadcaster and conservationist. Author of Into The Arena: The World Of The Spanish Bullfight, shortlisted for Sports Book Of The Year 2011. Editor & Co-Author of Fiesta: How To Survive The Bulls Of Pamplona. Author of 'The Unbroken', finalist for Le Prix Hemingway 2016
View all posts by fiskeharrison →
This entry was posted in Uncategorized and tagged alexander fiske-harrison, British Matador, bull-running, bullfight, bullfighting, corrida, daily telegraph, diario de navarra, die welt, ernest hemingway, feria del toro, fiske-harrison, gentleman's quarterly, gq, into the arena, pamplona, pamplona 2011, running the bulls, san fermin, the world of the spanish bullfight. Bookmark the permalink.